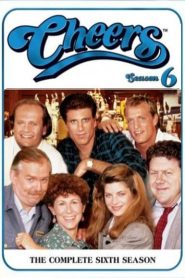 The sixth season of Cheers, an award-winning American television sitcom, originally aired on NBC in the United States between September 24, 1987 and May 7, 1988. This season highlights the debut of Kirstie Alley as Rebecca Howe. The show was created by director James Burrows and writers Glen and Les Charles under production team Charles Burrows Charles Productions, in association with Paramount Television.